Coming soon to a UM Computer & Video Game Archive near you... 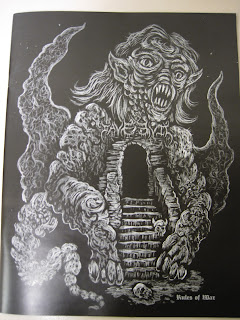 And a teaser trailer that awakens the dead.

An excerpt from the game introduction:

"The living buried their dead in maze-like cities deep underground, covering the entrances and leaving them to molder for all time. Yet the shadowflame burns deep within the abyss, and evil never sleeps. The dead and the demons who feast upon them found infernal life in this black world, and created a domain of their own, presided over by the Emperor of Eternal Evil, master of the Infinite Shadow and his millions of minions..."

From the game overview:

"Cave Evil is a game of brutal elimination. Each player is an ancient Undead Necromancer vying to harness the power of The Pit, source of Infinite Shadow. Only one Necromancer will succeed. All others will be annihilated..."